MIT Technology Review: Why Nematode Worms Could Hold the Key to Aging 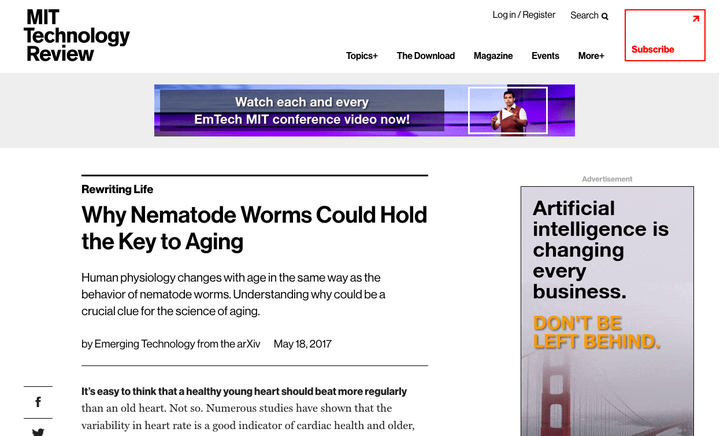 “Human physiology changes with age in the same way as the behavior of nematode worms. Understanding why could be a crucial clue for the science of aging.

by Emerging Technology from the arXiv May 18, 2017

It’s easy to think that a healthy young heart should beat more regularly than an old heart. Not so. Numerous studies have shown that the variability in heart rate is a good indicator of cardiac health and older, sicker hearts tend to show less variability, not more.

This pattern is important. Mathematicians call it a “heavy-tailed” or “power law” distribution, and it has significant features. Perhaps the most surprising is scale invariance. However closely you study such a plot, it always looks the same. So the variations that occur at one scale look exactly the same as the variations at another scale.

The movement patterns of nematode worms can now be monitored by machine-vision systems, a technology that is revolutionizing the study of worm behavior. This pattern is different for older people with more fragile hearts. And it is not just the heartbeat that varies in this way. Neural spiking patterns and human gait patterns also vary in the same way with age. And that suggests a new way to study aging by better understanding the role that scale invariance plays in biological processes.

There is a problem, however. Humans are hard to study in this respect. The aging process takes decades, and humans are difficult to monitor over these time scales.

So researchers would dearly love to study the nature of scale invariance in less complex organisms that are easier to look after. But the existence of these patterns in lower life forms has yet to be established.

Enter Luiz Alves at Northwestern University in Illinois and a few pals, who have found evidence of scale invariant patterns in the behavior of nematode worms. What’s more, these guys say the patterns change as the worms age and that this provides a powerful new way of studying the biological processes and mechanisms behind aging.

First, some background. Scale invariance is the notion that some things look the same regardless of the scale at which they are viewed.

Lots of things have this property. A coastline is scale invariant or fractal—it looks equally jagged whether examined at the scale of centimeters, meters or kilometers. An infinite straight line is scale invariant—there is no way of knowing how close you are to such a line simply by looking at it.

By contrast, rectangles, cars, and galaxies are not scale invariant. These objects look entirely different depending on their distance.

Study a plot of the size of fires against their frequency and there is no way to distinguish between big ones and small ones—they all follow the same pattern. And that implies that there is an important way in which forest fires are all the same.

Physicists think this similarity is founded in the way fires spread through the network of links between trees. A fire can only spread when these links are in place. But the network is constantly changing as trees grow and die away.

And that means there is no way of knowing how big a fire will become when it starts—the size depends on the nature of the network at that instant.

That has big implications for our understanding of cause and effect. Forest fires can be started by a stray cigarette or a carelessly discarded match. But their eventual size has nothing to do with this trigger. That depends on the network. Indeed, scale invariance in complex phenomenon is intimately linked to network science.

Take the size of earthquakes, which is also scale invariant. The relevant network here is the way forces are transmitted through rocks—this is what determines the eventual size of the quake.

Wars are also scale invariant (as measured by the number of deaths). Here, the relevant network is the way social, military, and political influences spread through a region. This is constantly changing for myriad reasons. It implies that anybody who starts a war cannot, in principle, know how big it will become. And the triggering incident is no more important in determining the eventual number of deaths than the size of the match that starts a forest fire determines how far it spreads.

But what is the relevant network that leads to scale invariance in biological systems? Nobody is quite sure, which is why the ability to study it in nematode worms could be so important.

The new experiments demonstrating scale invariance are straightforward. Alves and co begin with standard nematode worms, Caenorhabditis elegans, all born on the same day and grown in identical conditions in the lab.

The team then used a machine-vision system to track the movement of 10 to 15 of these worms in an enclosed space at 20 °C. They repeated these observations as the worms aged over six days and also as the temperature increased to simulate stress.

C. elegans usually live around two to three weeks, so the six days of the experiment are equivalent to observing a human age from adolescence to middle age. “Our comparisons are performed for the human equivalent of a 15 yr old and a 40 yr old,” say Alves and co.

The results make for interesting reading. Nematode worms do not move in simple straight lines and neither do they all move in the same way, despite their identical rearing. Instead, they move, then stop, then go backwards, travel longer distances, and so on.

This pattern is similar to a random walk, or Levy flight, and is well-known to animal behaviorists. It consists of lots of short journeys and a much smaller number of longer traverses. Many animals follow this pattern when foraging for food.

Crucially, the length of journey plotted against frequency is scale invariant or fractal, just like coastlines, the size of forest fires, wars, and human heartbeat variation.

What’s more, Alves and co say this scale invariance changes in a measurable way as the worms get older or experience more stress. These changes are the result of many factors such as egg laying, mate seeking, food foraging, and so on.

But the key thing is they change over time or with stress in measurable ways. “We find statistically significant differences in the fractal behavior of the motility of C. elegans for different ages and stress levels, similarly to what has been reported for human physiology,” say Alves and co. “Our results suggest that the similarity to the human aging process is deeper than previously thought.”

That’s an interesting conclusion that opens the way to a new line of attack in the study of aging. “We believe that C. elegans can be used to study how fractal dynamics are created by the regulatory processes of physiological systems and provide insights into the fundamental processes required to maintain a healthy physiology despite aging and stress,” say the team.

C. elegans is uniquely suited to this kind of work as one of the best studied creatures on Earth. It has a simple body structure with 302 neurons and a well characterized genome of 100 megabases. By comparison, the human genome has around 3.6 gigabases. But curiously, 40 percent of nematode genes are homologues with human ones.

That sets the scene for some interesting research. Alves and co have set themselves an ambitious target with a worthy goal. We’ll look forward to monitoring progress.

Read the article at: Long-range correlations and fractal dynamics in C. elegans: changes with aging and stress, Physical Review E 96, 022417 (2017).