Phys.org: Political corruption scandals may be predicted by network science 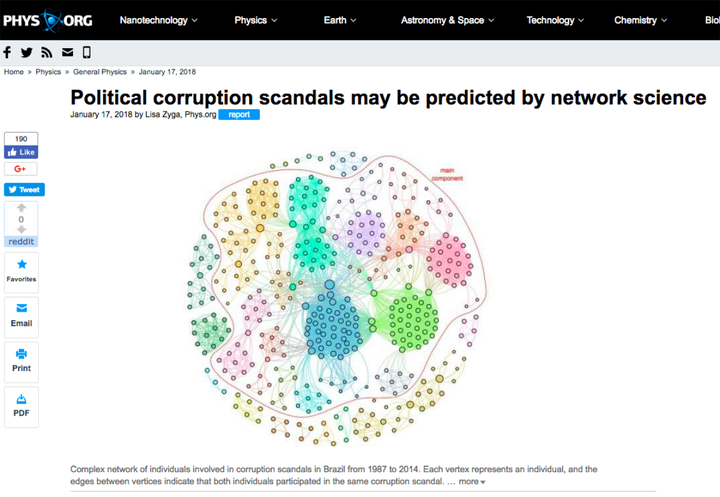 According to the World Bank, corruption scandals siphon more than $2 trillion per year from the global economy, making corruption one of the major causes of slow economic growth and socioeconomic inequality. Now in a new study, researchers have demonstrated that it may be possible to predict who will play a role in future scandals by modeling current scandals using networks. The results may provide a tool for detecting corruptive practices and reducing the high cost of corruption to society.

The researchers, led by Matjaž Perc at the University of Maribor in Slovenia and the Complexity Science Hub Vienna in Austria, along with Haroldo V. Ribeiro from the University of Maringá and coauthors from two other universities in Brazil, have published a paper on their analysis of political corruption using network science in a recent issue of the Journal of Complex Networks.

In their work, the researchers constructed a dynamic network of 27 years' worth of political corruption scandals in Brazil, and used time series analysis to study how the network evolves over the years. The model involves more than 400 nodes that represent individuals, along with links connecting individuals who were involved in the same scandal, for a total of 65 well-documented scandals. Overall, the results showed that such networks reveal a great deal of information about the intricacies of the scandals.

“Despite all odds, going against the veil of secrecy that surrounds corruption, and going against the people who are doing their best to remain anonymous and undetected, we show that applying methods of network science uncovers the gist of politically corrupt behavior,” Perc told Phys.org.

Among the findings are that political scandals typically rise and fall in time with election cycles, that scandals often involve small groups of 8 or so people (presumably because smaller groups are easier to conceal), and that it’s possible to identify individuals who have played central roles in multiple scandals.

To test the network’s predictive power, the researchers applied several different algorithms to predict missing links based on the similarity between nodes. They found that the best algorithms have statistically significant predictive power, with more than 25% of the top 10 predicted links appearing in future stages of the corruption network.

“We show empirically that corruption boils down to self-interested behavior in small groups that exist in hierarchical small-world networks,” Perc said. “We observe that the number of politicians involved in corruption increases with an oscillatory undulation that is linked to the four-year election cycle in Brazil. We also find that only a few well-linked individuals dominate a modular network structure, which often changes suddenly as the government changes. And ultimately, we show that future ‘partners in crime’ can be accurately predicted based on the dynamical structure of corruption networks. In short, we show that politically corrupt behavior gives away nearly all of its secrets when analyzed in the realm of corruption networks.”

In the future, the scientists plan to apply these techniques to a problem which they are all too familiar with: the ethics of research funding, particularly in Slovenia.

“The biggest challenge lies in obtaining comprehensive and reliable data,” Perc said. “We may therefore look next at relatively overseeable public sector operations in Slovenia, from state-funded research to the national award system, which appear to be off their hinges in recent years. These operations are failing to support capable young people in exchange for keeping utterly useless but politically loyal individuals and institutions happy. Hopefully, our research will help with the transition towards a sustainable and more meritocratic spending of public research funds.”

Read the article at: The dynamical structure of political corruption networks, to appear in Journal of Complex Networks (2018).