Analogies between the cracking noise of ethanol-dampened charcoal and earthquakes 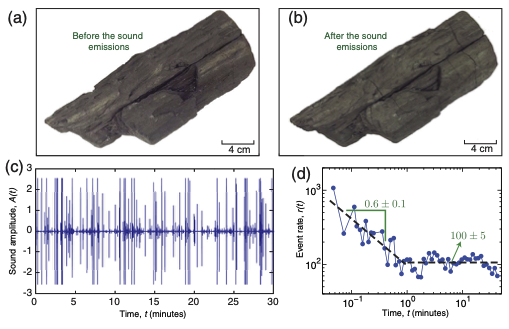 We report on an extensive characterization of the cracking noise produced by charcoal samples when dampened with ethanol. We argue that the evaporation of ethanol causes transient and irregularly distributed internal stresses that promote the fragmentation of the samples and mimic some situations found in mining processes. The results show that, in general, the most fundamental seismic laws ruling earthquakes (the Gutenberg-Richter law, the unified scaling law for the recurrence times, Omori’s law, the productivity law, and Båth’s law) hold under the conditions of the experiment. Some discrepancies were also identified (a smaller exponent in the Gutenberg-Richter law, a stationary behavior in the aftershock rates for long times, and a double power-law relationship in the productivity law) and are related to the different loading conditions. Our results thus corroborate and elucidate the parallel between the seismic laws and fracture experiments caused by a more complex loading condition that also occurs in natural and induced seismicity (such as long-term fluid injection and gas-rock outbursts in mining processes).