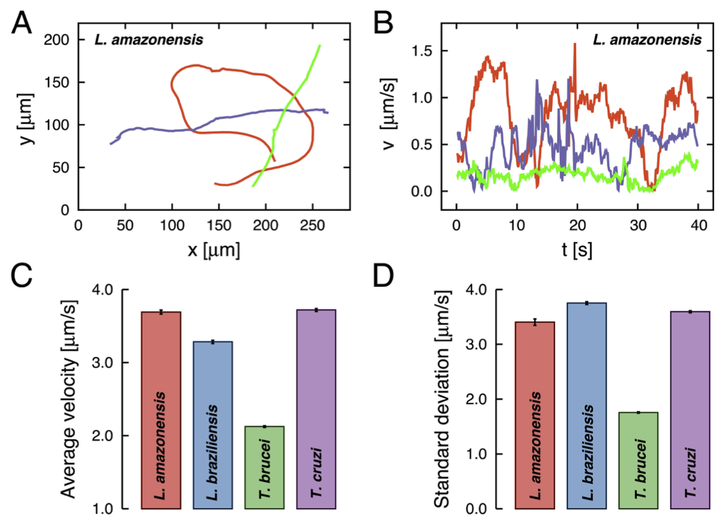 We report on a diffusive analysis of the motion of flagellate protozoa species. These parasites are the etiological agents of neglected tropical diseases: leishmaniasis caused by Leishmania amazonensis and Leishmania braziliensis, African sleeping sickness caused by Trypanosoma brucei, and Chagas disease caused by Trypanosoma cruzi. By tracking the positions of these parasites and evaluating the variance related to the radial positions, we find that their motions are characterized by a short-time transient superdiffusive behavior. Also, the probability distributions of the radial positions are self-similar and can be approximated by a stretched Gaussian distribution. We further investigate the probability distributions of the radial velocities of individual trajectories. Among several candidates, we find that the generalized gamma distribution shows a good agreement with these distributions. The velocity time series have long-range correlations, displaying a strong persistent behavior (Hurst exponents close to one). The prevalence of “universal” patterns across all analyzed species indicates that similar mechanisms may be ruling the motion of these parasites, despite their differences in morphological traits. In addition, further analysis of these patterns could become a useful tool for investigating the activity of new candidate drugs against these and others neglected tropical diseases.