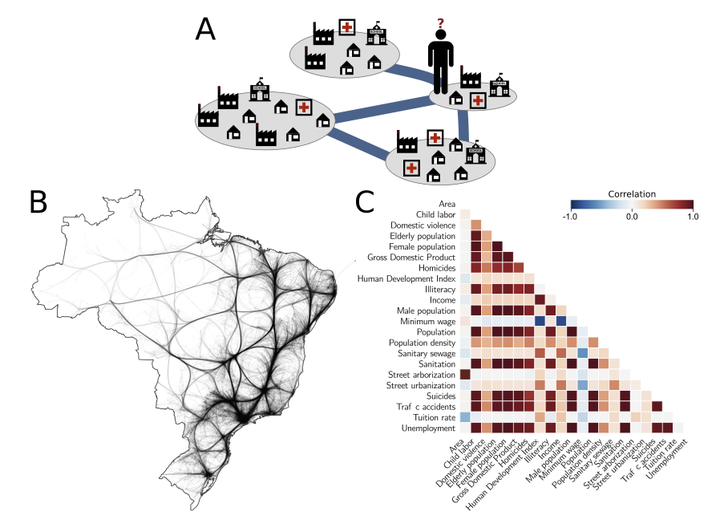 Human mobility has a significant impact on several layers of society, from infrastructural planning and economics to the spread of diseases and crime. Representing the system as a complex network, in which nodes are assigned to regions (e.g., a city) and links indicate the flow of people between two of them, physics-inspired models have been proposed to quantify the number of people migrating from one city to the other. Despite the advances made by these models, our ability to predict the number of commuters and reconstruct mobility networks remains limited. Here, we propose an alternative approach using machine learning and 22 urban indicators to predict the flow of people and reconstruct the intercity commuters network. Our results reveal that predictions based on machine learning algorithms and urban indicators can reconstruct the commuters network with 90.4% of accuracy and describe 77.6% of the variance observed in the flow of people between cities. We also identify essential features to recover the network structure and the urban indicators mostly related to commuting patterns. As previously reported, distance plays a significant role in commuting, but other indicators, such as Gross Domestic Product (GDP) and unemployment rate, are also driven-forces for people to commute. We believe that our results shed new lights on the modeling of migration and reinforce the role of urban indicators on commuting patterns. Also, because link-prediction and network reconstruction are still open challenges in network science, our results have implications in other areas, like economics, social sciences, and biology, where node attributes can give us information about the existence of links connecting entities in the network.