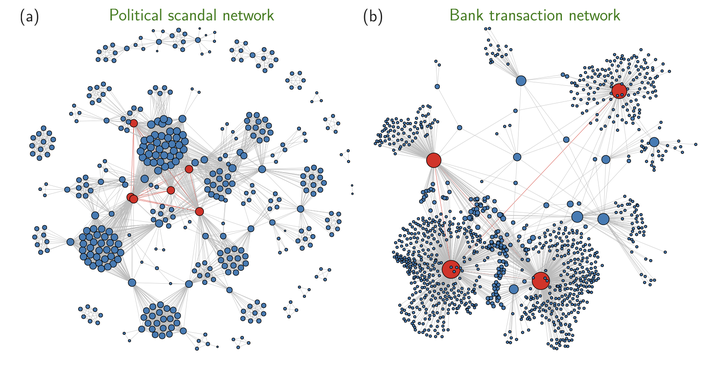 Objectives: We investigate cooperative and competitive behavior in corruption networks. Methods: We draw on two network data sets: (i) the network connecting criminals involved in political scandals; and (ii) the network connecting companies jointly partaking in misappropriation of public funds and money laundering. We measure topological and weighted rich-club effects to uncover the tendency of criminal actors to forge, invest in, or shy away from relationships with one another. We use the following richness parameters: (i) degree; (ii) strength; (iii) effective size; (iv) efficiency; and (v) clustering. We assess rich-club effects by constructing appropriate null models that preserve the topology and richness distribution of the original networks. Results: Despite the inclination of very connected political actors to coalesce into exclusive clubs, their relationships tend to be weaker than randomly expected. By contrast, financial transactions between very connected companies tend to be avoided; yet, when established, they tend to be much stronger than one would expect by chance. We also examine the role of social capital in corruption schemes. While political actors maximizing brokerage opportunities tend to co-offend with one another, there is competition between companies holding prominent intermediary roles in money laundering. Conclusions: Our results on the emergence of collusive arrangements and competition over the control of scarce resources have implications for crime prevention and control in corruption networks. More can be learned on the structure of corruption schemes by using longitudinal network data sets providing time-varying node-level socio-economic indicators and covariates on path dependency in social tie formation.